Rachael has been working for Ruby Cup as promoter since December 2012. Due to her quick ability to understand and her talent for management and coordination, she quickly became main Ruby Cup promoter, helping other promoters to improve. She is an integral part of the Ruby Cup team in Kenya and her happy nature brings sunshine to the office every day. Rachael grew up in the slums of Mathare and wrote us a letter about her life and what Ruby Cup means to her. 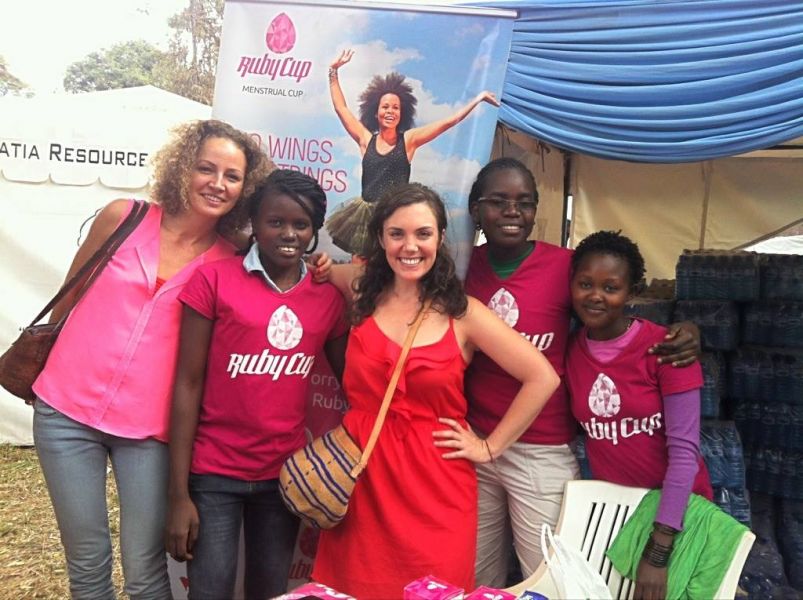 Rachael with the Ruby Cup team at the International Trade Show in Nairobi
From left to right: Julie, Vanessa, Lauren, Maximillah and Rachael 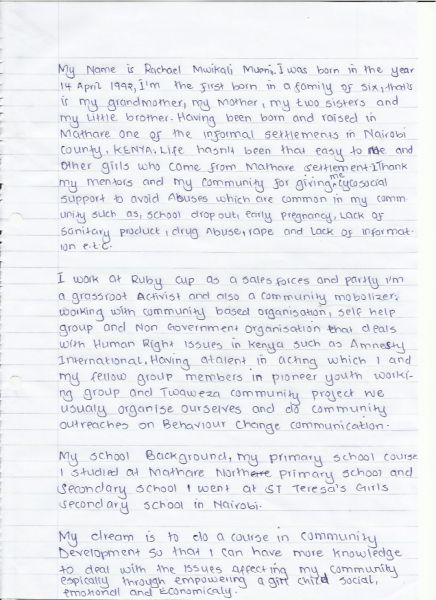 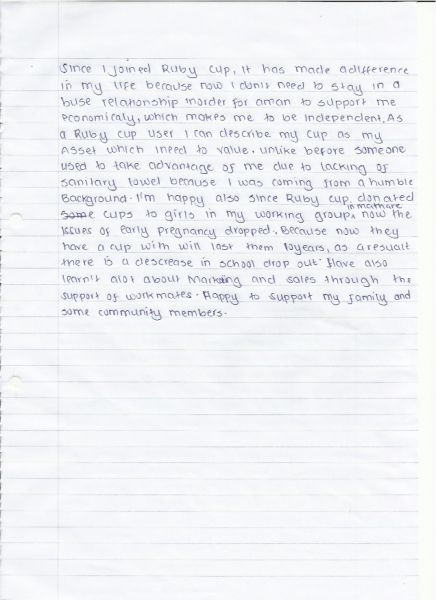 My Name is Rachael Mwikali Mueni. I was born in the year 14 April 1992, i’m the first born in a family of six, that’s my grandmother, my mother, my two sisters and my little brother. Having been born and raised in Mathare one of the informal settlements in Nairobi county, KENYA. Life hasn’t been that easy to me and other girls who come from Mathare settlement. I thank my mentors and my community for giving me social support to avoid Abuses which are common in my community such as, school drop out, early pregnancy, lack of sanitary product, drug Abuse, rape and Lack of Information e.t.c.

I work at Ruby Cup as a sales forces and partly I’m a grassroot Activist and also a community mobolizer, working with community based organisation, self help group and Non Government Organisation that deals with Human Right Issues in Kenya such as Amnesty International. Having a talent in acting which I and my fellow group members in pioneer youth working group and Twaweza community project we usualy organise ourselves and do community outreaches on Behaviour Change communication.

My dream is to do a course in community Development so that I can have more knowledge to deal with the issues affecting my community espically through empowering a girl child social, emotional and Economicaly.

Since I joined Ruby Cup, it has made a difference in my life because now I don’t need to stay in a buse relationship in order for a man to support me economicaly, which makes me to be independent. As a Ruby Cup user I can describe my cup as my Asset whicht I need to value. Unlike before someone used to take advantage of me due to lacking of sanitary towel because I was coming from a humble Background. I’m happy also since Ruby Cup donated cups to girls in my working group in mathare.  Now the issues of early pregnancy dropped. Because now they have a cup wich will last them 10 years, as a result there is a decrease in school drop out. Have also learn’t a lot about marketing and sales through the support of workmates. Happy to support my family and some community members.