I woke up this morning and had forgotten to set the alarm. Yep, this is still a thing that happens in adult life. I was enormously late for work and as my brain slowly wakes up (as much as that is possible without coffee), I remember that the getting out of bed will end up in a disaster. Why? Because I am in the middle of my 24-hour massive, massive heavy flow time. Heavy period acute alarm.

I’m convinced all the period experts are lying when they say that the average amount a woman bleeds during her period is 3 tablespoons. More like 20, at least in my case. Confession: I sometimes fear I will suffer from blood loss as much as I bleed on the first day of my period. Please tell me, I’m not the only one?

But luckily, I was not completely unprepared.  At least I was wearing my Ruby Cup Medium, which is an absolute necessity for my heavy period. But right now, I know my body, I know my Ruby Cup and I know that sleeping an extra 3 hours is too much even for my Ruby Cup to handle. Overflowing is what’s about to happen.

Girls with heavy periods, I’m sure you can relate to that feeling where you know that you’re still safe while in a horizontal position, but as soon as you stand up, blood will flow…

Well, that’s me. I was lying there, trying to calculate the distance between bedroom and bathroom.  But, I was also kinda in a hurry so I did not have enough time to do the complex physical calculation of the possible amount of blood spill, my velocity and distance to the bathroom.

So –  1,2,3 –  and I swing myself out of bed.  I can feel the familiar overflow starting…but it stops right there, in my panties, without any further consequences. Consequences meaning another ruined pair of my pyjama undies and uncomfortable leaking.

And why? Because I’m wearing my Thinx period panties -Hallelujah! I got them recently because, as a heavy period kinda girl, I couldn’t resist what they promise.  I had been dying to try out some double backup that did not include bulky panty liners or switching to my period stained old granny-nickers.

In that moment, I seriously felt like I could reign the world. I even woke up my (yes, also still sleeping) boyfriend, because come on, I really had to share this success with someone! So I proudly show him my outfit and explain my double up master plan consisting of Ruby Cup and Thinx panties and the magic that’s happening. I even dare to do a little jump to prove him how amazing this is – and no blood spill! 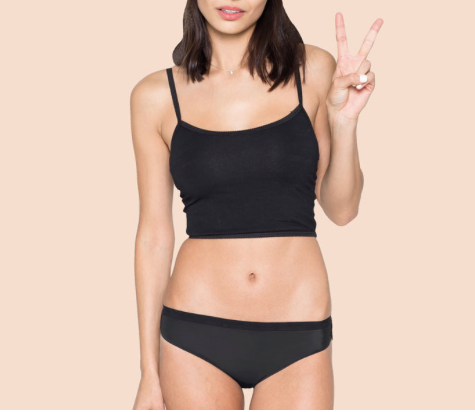 I have finally, after so many years of heavy bleeding and knowing that some kind of leak during my heavy flow day will happen, found the perfect solution. Ruby Cup is my forever darling but adding the Thinx panties took it to a whole other level and completed my period safety net.

Ruby Cup and Thinx are now my new best couple friends, together they literally complete my bloody freedom for those first 24 hours of my monthly period.

Standing ovulations for these 4 comedians

In September, four comedians decided to perform as a collective at Zulu Comedy festival in Denmark. Tired of being tr...
Read More

Did you know that the past year our team has doubled in size? Five amazing new team members have joined Ruby Cup in B...
Read More